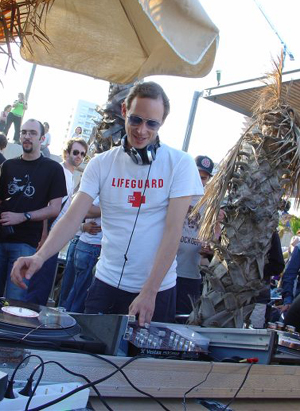 Michael, first of all, congratulations! You’ll soon celebreta the fact you’ve released 100 12 inches. How did it all began and did you expect you would of come to 100?
Thank you very much. Well, it’s a long story which started in march 1993 with the opening of our first recordshop called Delirium. At that time we already run numerous labels and parties under lots of different names, i.e. Trance Atlantic, NTA, Structure, Profan, Forever Sweet and the ‘Friends Experiment’ party series… as things became more and more difficult to explain and to track down for people we decided to create one roof for all our activities in 1998. This is when Kompakt was founded as a trademark for everything: Our distribution, the label, recordshop, mailorder and parties. If we expected to reach the 100? In a way yes, because the family behind our company is still the same as back in 1993. Wolfgang & Reinhard Voigt, Jürgen Paape and myself are still closest friends and we still agree about ‘how to run this business’ and first of all: ‘What’s hot and kicking electronic music’.

You’re the owner of Kompakt which is getting bigger and bigger, can you still find time for your artistic side?
This is the dark side of success. Everybody involved in the company originally is an artist. None of us really cared about the serious business side connected to it, all the paperwork and accounting things. We’re all autodidacts regarding this. With the growing responsibility for the artists and roundabout 70 labels we take care of by now, the time we had left to spend in the studio became less and less. But we don’t regret anything and it’s rather a beautiful thing to watch so many acts growing that we supported for such a long time. It feels a bit like being parents of a whole musical movement, a whole new breed of exciting techno producers. As a DJ I profit a lot from their existence. If there would be no Kompakt distribution I maybe wouldn’t know what to put on the decks every weekend…

How has the managing part influenced your artistic way of thinking?
In the end it’s only two sides of the same thing. When you collected a lot of experience with other labels or distributors like we did, having lots of argues about artistic topics like ‘Why do you release such kind of shit? This is not techno blablabla…’ then you start to worship this sudden complete independence in creating your own music or in choosing the tracks you want to release. When something doesn’t sell or people don’t accept it, it’s your fault, your responsibility. In the end, I think all this dry and sometimes boring work made us all artistically freer.

I saw you at a beachparty during the Sonar event in Barcelona (thanks btw it was a very nice day!), kinda hard to see you in Holland though, how come?
Strange that is, isn’t it. We’re practically neighbours. I only played in Holland once in pfuhhh…. 1995, in Amsterdam in a shitty House Club. The promoter threatened me (and Wolfgang who was performing live as Mike Ink) that he would hurt us badly when we don’t play house immediately. However, I guess this can’t be the reason. But it’s not the end of all days… Come what may! We’re ready whenever you are.

They often talk about the recognizable “Kompakt-sound”. How would you describe this sound?
Not an easy question because there is no such thing as ‘one Kompakt sound’. You’ll find everything from hard techno, pop-related stuff until floating ambient music on our label. Though, the backbone of everything we did so far was minimalist, reduced music with a certain non-conform attitude and a ‘soulful’ edge to it. We choose our artists very carefully by the originality and character of their music. Kompakt stands in the tradition of consistently delivering alternatives to the zeitgeist. When you’re bored of what’s hip at the moment, you can be sure to find some exciting alternative ideas on Kompakt. We hate boring music. We love to entertain ourselves in order to entertain anybody else who’s willing to dare something new.

A very simple question, is minimal getting bigger?
It seems like the Benelux catch up what they were missing in the last 10 years. We never sold many records there but now it seems to change. The feedback is getting stronger. In general I like the idea of minimal being an international language, like techno Esperanto. There’s a worldwide network of artists and labels and it’s getting bigger day by day. Nobody really becomes rich with this but you can be sure to meet some of the finest persons and most friendly spirits in music scene. Minimal is reduced to the absolute necessary elements of dance music, those sounds that make your body move. It can be charged with any kind of local flavour or cultural heritage. I’m still waiting for banghra minimal, more African influences or scotch bagpipe microhouse. The rest already exists.

You’ve made records and did even more remixes, when can we expect an album instead of the mix cd’s you’ve already made?
I announced my first artist album already 3 years ago. The reasons why it’s still not in your hands are obvious. But when everything goes fine, I should be ready mid of November. I’m currently working on it as a priority.

Can we do a bigger interview when you have more time?
Stop the earth from turning for an hour – than it would be a pleasure for me to talk more excessively…