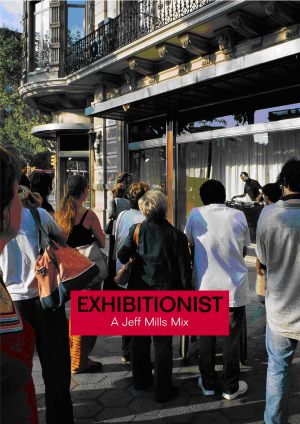 Conceived and designed in the direction of programmable software rather than the usual DVD "Live" recording, this latest project of Jeff Mills, "Exhibitionist" will prove to point out a step forward into a new era in Electronic Music.

The ideas and concept behind Exhibitionist originate as far back as early 1996. As Jeff Mills constantly searches for new innovative territory, he arrived at this subject of simulating himself to appear in multiple locations at the same time because of time confliction's and an overload of DJ booking request from around the world. Jeff's first inquisition was to use the 3 dimensional projection format called Holographs. A transparent ghostlike projection where a free-floating image is unsupported by a backdrop screen. After quite extensive research and inquiring Jeff discovered that the technology was not yet at a consumer friendly stage where projecting in the average club setting would be a difficult and complex task. He discovered and rested at the idea of simply filming his DJ performance using a high grade digital tape that would serve the objective just as well and is more compatible for current live performances conditions.

The initial test showing was in 2001 at the venue, Liquid Room-Tokyo. In the middle of the DJ set of Jeff Mills, he disappears from the DJ stand and allows the DVD filming to take over that task of djing can controlling the audience. The crowd, not realizing if it is live or recorded continued to dance effortlessly. Once they discovered what was happening, the crowd responded with overwhelming approval and party exceeded to another level. Jeff rejoined the film image of himself and both, Jeff and simulated projection began to DJ together.

Capturing the characteristics of Electronic Music on an Exhibitionist level

It was once said "What a valuable asset the future would hold if we all began to capture what we do today." The idea of being able to recall and reflect upon request is task that could serve musicians, artists and the audience very well in the future. Remembering the excitement of an artist or DJ "in action" is the key component for longevity because through our memory it is often how we measure effectiveness of the situation. In addition to the main objective of simulating the artist and/or DJ, this DVD provides an array of features that will be discovered, explored and expanded upon.

All mix segments were filmed in Detroit, USA. A DJ setup and lighting were created to simulate the authentic look and stereo sound of a DJ in a club DJ booth. A black backdrop behind Jeff Mills was used so that the reprogramming of this footage in a live setting would not conflict with existing decor. With this imagery, the DVD can be used in these ways:


DVD Usage:
Promotional Device
By installing a showing this DVD within a music department and/or record shop for shoppers to view, shoppers would then have the unique opportunity to see Jeff Mills physically mix, hear and read the track titles/artists so that locating and product purchases could be swiftly made. New releases, special promotions, etc.

DJ Instructional Device
Certain mixes (Axis, Purpose Maker and Exhibitionist Mixes) on the DVD were shot in 3 angles (front center, side view and top view) so that viewing DJs or the curious persons can see exactly how Jeff Mills mixes in multiple techniques of using crossfader, line levels and/or EQ. Located on most DVD hand remotes the features: angle, slow motion and zoom are commonly found.

Live Performance Viewing Device
The coordination of multiplying DJ Jeff Mills in a live setting or installing projections of him along with other performing DJS/Artists. Unique video screen positioning, enlarging, reducing images of the DVD could serve other purposes.

Exhibitionist Mix
A selection of music from around the world's most talented Electronic Music Artists.
Running time: 45 minutes

Jeff Mills interview
An in-depth interview where Jeff Mills explains the creation of Axis and its past and future ideas.
Running time: 30 minutes