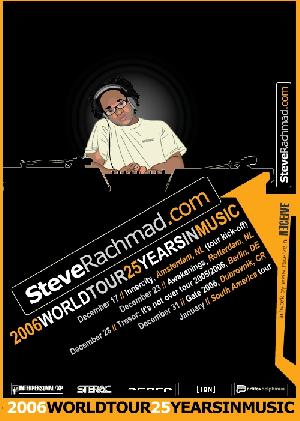 Kicking off at Innercity at Amsterdam RAI, NL on December 17, 2005, Steve Rachmad will tour the World in 2006, celebrating his 25-year involvement in music. This will be followed by some major releases and remixes to be out in 2006, as his new, long-awaited artist album on Music Man Records Belgium, and a Sterac Electronics remix of M.A.N.D.Y. and Booka Shade’s Body Language on Get Physical Records.

Rachmad’s passion for music awakens at an early age. By the age of 12, he buys his first records and starts experimenting with track editing. He starts to mix, remix and cut-and-paste their parts with an open reel tape deck. Soon after, music becomes his main drive. Initially an excellent student, he starts neglecting homework and hides in his bedroom—which will until late 1990s be his studio, where he produced various techno classics, among which his famous Sterac album Secret Life of Machines.

His first cut-and-paste releases came out in the mid-1980s, amid which also the one created for a hip-house/dance artist Tony Scott. At the age of 15, Rachmad has his first DJ gig at a small Amsterdam club: he plays disco.

In his early teens, Rachmad works as a newspaper boy, spending all his earnings on records and musical equipment. In 1985, at the age of 16, he buys his first piece of hardware—a TR-808. This would be the base stone of his later professional studio, which remains mostly analogue up to present time.

Rachmad’s early musical aspirations went towards 1980s disco and electro; works of artists as Jimmy Jam and Terry Lewis (former Time members), The System, Arthur Baker, etc. Their music will remain his reference up to date, for its exquisite technical qualities and a soulful “black feel.”

In 1986, his attention is captured by the house music; specifically, by the new sound coming mostly from Chicago and Detroit, from the artists as Mr. Fingers and Derrick May. Accordingly, his style takes a new direction. He would soon be found releasing on Fragile (sub-label of Transmat, ran by Derrick May) and Underwater (ran by Darren Emerson).

In 1996, with the release of his Secret Life of Machines album, his DJ career starts taking Global proportions. Until today, Rachmad has traveled the World, spinning at major clubs and events. He occasionally plays 80s disco and electro, but predominantly techno. His releases continue into the present, on labels as Music Man, CLR, Jericho, Sino, etc. He remixes artists like The Advent, Chris Liebing, Vince Watson, etc. He also runs three labels: Scorp, Ion and Interpersonal //XP. His productions as well as DJ sets remain recognizable for deep, groovy sounds that tend to rest on impressive strings, melodies, funk and soul.

In the latest years, next to his characteristic techno sound, he also actively focuses on electro, stripping it down to the old-school feel. His latest Sterac Electronics remix of the vocal track Love Sweet Love (by Clashing Egos), and the “Night Heat” release on Music Man Records have ended up in the record bags of a wide variety of artists, from techno, to minimal, house and electro. He re-confirms his reputation as an artist with exquisite ear for technical qualities of sound, always returning to his soulful roots and maintaining the warmth of analogue-produced music.

2006 World Tour: 25 Years in Music will bring Rachmad all over Europe, South America, USA, Asia and Australia. Thanking everyone who supported him over the past years, he will return to places that played a major role in his DJ career, as well as enter new areas where he is yet to write his future. In between a busy DJ schedule, Steve also reserved few weeks in 2006 for studio work, as some major labels are awaiting for his EPs and remixes. Parallel, he is involved in the project initiated by Joost van Bellen, for which he is remixing Sebastian Bach’s St. Mathew Passion—project that started in 2003 and culminated on Easter 2003 when a selection of Dutch producers and visual artists presented their outcomes. The new version of St. Mathew Passion—New Generation Remix will be touring in the first weeks of April 2006.