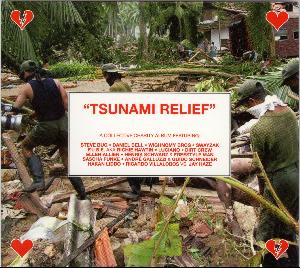 On December 26th, 2004 the second biggest seaquake in the history of mankind caused a devasting catastrophe in the Indian Ocean. Meanwhile all facts and details are known and maybe most of you felt the same when briefly before new years eve the shocking pictures appeard on TV from which you couldn‘t elude, although the extend of the catastrophe wasn‘t fully obvious at that time. On December 27th, 2004 Jay Haze picked up the phone to call an array of german and international artists and spontaniously the idea of this non-profit resp. aid compilation was born.

All artists contributed a new and unreleased track without any commission - the same did the Berlin based manufacturer Handle With Care, the Hamburg based distributor Word And Sound and the PR office Superstion Network Promotions. The final statement will be revealed and can be seen from October 1st on request.
All income from the compilation will be donated to an orphanage in Indonesia. This way the money will not be subject to bureaucracy and go directly to helping children.
„Tsunami Relief“ - the first benefit/aid compilation from the german House- and Technoscene will be released on April 25th through Word And Sound. As an exception we would kindly ask you not to use the usual criterias of selection for your reviews, but to give „Tsunami Relief“ the biggest space possible. The more publicity we altogther manage to gain, the more people will buy the album and the more money we are able to donate.