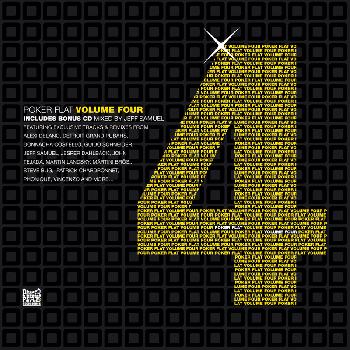 
Poker Flat Recordings proudly presents it’s fourth label compilation and makes a strong musical statement. With an array of strong 12” releases in the last couple of months label headhoncho Steve Bug proved once more his A&R skills in the current season. Not few of the last singles turned out to be massive worldwide clubhits. Some of them are now included on “Poker Flat Volume Four”. The lead takes John Tejada’s indestructible „Sweat (On The Walls)“ with the distinctive spoken vocals of Qzen closely followed by Steve Bug’s re-loved „Loverboy“. Heavily featured is one of the big discoveries of 2004, Guido Schneider who set dancefloors on fire all over the place with his remarkable minimal, but groovy productions. Not to be missed out is one of Poker Flat’s longtime artists Martin Landsky who is on here with his last oldschool monster „Fools“ as well as with his brand new piece „FM Safari“. Acid-Techno man of the moment Jesper Dahlbäck teamed up with Alexi Delano for the Poker Flat project ADJD and their best tunes so far are on the album as well as the superb Prins Thomas mix of (She’s) Heavy Metal“ by the one and only Märtini Brös. The french/german triptych Phonique, David Duriez & Phil Weeks contributes it’s „Altered Rock“. To round up the picture seminal Detroit Grand Pubahs are on with two tracks. On top no less than eight tracks have been exclusively produced for this double album! First on Steve Bug contributes his brand new track “Bug In Your Brain”, a fabulous minimal tech-whatever-house tune which does it’s name credit. More exclusives have been penned by one of NYC’s top producer Alexi Delano who also forms ADJD with Jesper Dahlbäck, Minimise’s Donnacha Costello who stirred a buzz with his colourseries, Poker Flat’s up and coming minimal wizard Guido Schneider, long time affiliate Vincenzo who’s finally back with his first slamming production since a while and the two newcomers Patrick Chardronnet from Stuttgart who dropped his debut single on Raum…Musik and teams up with Get Physical’s Afrilounge as well as Argy from London. Last, but not least Jeff Samuel contributes an exclusive & brandnew track himself. On the second CD “Poker Flat Volume Four” features a superb bonus-mix by Jeff Samuel. Now Seattle based Samuel proved already his fine sense for music on the border of minimal funk, house-orientated groove and a technoid drive on his productions for Fabric, Trapez, Morris Audio, Kompakt, Lo-Fi Stereo, Poker Flat and others which made him the perfect choice to mix the annual Poker Flat album. His brilliant mix showcases and melts kicking TechHouse tunes with quirky minimal tracks and housey songs in a perfect flow. Altogether “Poker Flat Volume Four” is a huge package including 25 modern, state of the art songs in the field of techy & minimal House which is difficult to pigeonhole.

About Jeff Samuel
Jeff Samuel‘s foray into electronic music began in 1995 when he first witnessed a DJ set by Detroit‘s Claude Young in Columbus, Ohio. He was then introduced to that city‘s elemental collective, an inspiring core of artists including Titonton Duvante, the Archetype, and Todd Sines among others. Through their concept-oriented events which showcased the finer points of electronic music, Samuel became enthralled and began to DJ in 1996. Soon after, he purchased his first synth and drum machine. While attending college in 1997, Jeff began exploring the possibilities of software-based music production where he saw greater possibilities for creativity and workflow. He encountered much scrutiny for attempting to make techno using only a computer. Nevertheless, by 1998 he had started to create his own completed tracks using an early version of Fruityloops (now FL Studio). Music from his first demo was signed to the German label Lo-fi Stereo. The “Bidooba” single was released in 1999 and featured a remix from Kompakt’s Michael Mayer. Other tracks from the same demo found their way to minimal techno pioneer Daniel Bell, who released them on his 7th City label in 2001. Jeff pushed into the new millennium continuing his DJ career, releasing more music, and completing his college degree in Audio Production simultaneously. 2002 proved to be a significant year which saw his Digital Self EP on Tektite remixed by Ricardo Villalobos, his abstract material released by UK label Emoticon, and the beginning of a long relationship with Colognebased Trapez Recordings. He also left Ohio for Seattle where he pursued a career as a Sound Designer in the videogame industry. Today, Jeff Samuel is a sought-after remixer with a heavy DJ and production schedule who still finds the time to make SFX for videogames. His records are played by a diverse range of the world’s most talented DJ’s including: Richie Hawtin, Sven Vath, Ricardo Villalobos, Francois K, Steve Bug, Akufen, Craig Richards, Mazi, Claude Young, Timo Maas, Josh Wink, Electric Indigo, Michael Mayer and John Tejada. He is also currently the only American DJ represented by the exclusive Kompakt organization. Plans for the future include a mix CD and debut LP. The first plan became reality as Jeff mixed the bonus CD for “POKER FLAT VOLUME FOUR”. Jeff Samuel also released his “Blap EP” (pfr39) on Poker Flat and remixed Guido Schneider meets Jens Bond “Oh My Buffer” (pfr53) which is also included on this album as well as Jeff’s exclusive track “Glurf”.

www.pokerflat-recordings.com
Tracklistings
CD1:
1. Martin Landsky: FM Safari
(Patrick Chardronnet‘s Silent Snake mix)
„FM Safari“ is pure hypnotic minimal house. While the
forward pushing rhythm construction builds and changes
slowly throughout the entire track, a magic melodyfragment
forms the epicentre of the song. Promising
newcomer Patrick Chardronnet‘s Silent Snake mix is
a rather restrained version that builds very slowly and
crawls like a snake just to kick into your hollow of the
knee when you don‘t expect it. Taken from PFR54.
2. Steve Bug: Loverboy (re-bugged by Steve Bug)
There aren’t many tracks around like „Loverboy“. Featured
on the 1st Poker Flat release „Double Action“
way back in 1999 this track still brings massive enthusiasm
on every floor. To call ‘Loverboy’ just a clubhit
doesn’t really describe the magic in it. Here is Steve‘s
own strong remix from Poker Flat 50.
3. John Tejada: Steppa
„Steppa“ by Californian top-producer John Tejada
comes in a very reduced sound-outfit with abstract
spoken word fragments and a slightly broken, cristal
clear rhythm construction. Taken from PFR52.
4. Vincenzo: Peng **
Long time Dessous and Poker Flat label companion
Vincezo is back after quite a while with a bang. „Peng“
is an acidic straight forward banger that has his dark
moments. Great comeback. Exclusively produced for
this album.
5. ADJD: Bring It Back
Alexi Delano and man of the moment Jesper Dahlbäck
presented this very dark monstertrack with morbid
vocals and hypnotic groove lines on their second
ADJD 12“ (PFR48).
6. Martin Landsky: Fools (They Don‘t Know The
Time) (Main mix)
Poker Flat inmate Martin Landsky banged out this exciting
and pushing mixture of a warm, but electrifying
bassline, straight forward going beats and synthies on
the „Fools“ single (PFR45) in autumn 04. His main mix
features Cassy on vocals.
7. Detroit Grand Pubahs: Big Onion (Joakim Slap
On It remix)
A Minimal Techno masterpiece with slamming beats
and the distinctive pitched vocals by Paris The Black
Fu who drops his dirty funk like nobody else. Versatile‘s
own Joakim contributes this nice reduced and freaky
remix in his very own handwriting. Taken from PFR43.
8. Alexi Delano: Can You Compute? **
Alexi Delano aka ADNY is without a doubt one of the
top producers and DJs on the techno house circuit.
„Can You Compute“ gives us a promising preview on
his forthcoming album „Stories of an Alien Brother“.
Dark & weird vocals ask „Can You Compute?“ seek
contrast to the spooky melody.
9. Argy: Nuthouse **
London based Argy aka Argyris Theofilis is a new talent.
His dry, minimal and nutty Housetrack „Nuthouse“ has
been exclusively produced for this album.
10. Märtini Brös: (She‘s) Heavy Metal (Prins Thomas
remix)
Norwegian DJ & producer Prins Thomas who is one
half of Made in Hongkong did a reduced and slighty
percussive remix of „(She‘s) Heavy Metal“ from the
Brös new album „Love The Machines“ (pfrcd/lp12). He
came to the Brös attention through his massive remix
for Kango‘s Stein Massiv of „Saltvann“ and strips down
the track to the Synth Groove backed up with excellent
rhythm patterns. Taken from PFR49.
** = exclusively produced for this album
www.pokerflat-recordings.com

CD2: mixed by Jeff Samuel
1. Detroit Grand Pubahs: Surrender
(Martin Landsky remix)
This excellent mix by Martin Landsky who adds a
brilliant swinging groove, hypnotizing everyone
on the floor has been released on the third single
(PFR51) from the Pubahs Poker Flat album „Galactic
Ass Creatures From Uranus“.
2. Steve Bug: Bug In Your Brain **
Of course Poker Flat label head Steve Bug couldn‘t
resist to produce an exclusive track for the album as
well. His hypnotising „Bug In Your Brain“ chirps and
funks that it‘s a real feast and makes full credit to the
track‘s name.
3. Chardronnet vs Afrilounge:
Just For A Little Peek **
Stuttgart, Germany based Newcomer Patrick
Chardronnet teams up with Get Physical‘s Afrilounge
for a little groansing peek on things to come.
Exclusively produced for this album.
4. ADJD: Save Me
„Save Me“ is dark, but groovy techno-acid monster
by Alexi Delano and Jesper Dahlbäck who
put Stocktown on the map with their debut EP
„Stocktown Bizniz“ (PFR42).
5. Guido Schneider meets Jens Bond:
Oh My Buffer (Jeff Samuel remix)
„Oh My Buffer“ is a very well produced minimal masterpiece
with the typical Guido Schneider ingredients:
dry as dry can be, but still forward and funky,
amazing sounds and instruments with subtile effects,
twists and turns. In his remix Jeff Samuel turned the
bassline into a funky stepper and added some mellow
chords and bleeps. Taken from PFR53.
6. Guido Schneider: As Dry As I Can
Still heavly requested is this dry as a fart tune from
Guido‘s second Poker Flat EP „Unterwegs mit Guido
Schneider“ (PFR47). It‘s amazing to hear how the
cascading synth line is whipping the track forward
so intensly.
7. Martin Landsky: FM Safari
(Patrick Chardronnet‘s Cheeky Chimp remix)
Patrick Chardronnet‘s second mix of Landsky‘s „FM
Safari“ comes in a slightly drier and tighter sound
setting.
8. Steve Bug: Loverboy
(re-loved by Steve Bug feat. Cassy)
The other brilliant Steve Bug remix of Loverboy features
Cassy on vocals. Taken from PFR50.
9. Phonique & The Usual Suspects (Duriez &
Weeks): Altered Rock (Phonique version)
Phonique who just released his debut album on Dessous
teams up with Mr. Brique Rouge David Duriez
and Robsoul’s Phil Weeks for this funky rocking tune
taken from PFR46.
10. Jeff Samuel: Glurf **
After his “Blap EP” (PFR39) Jeff Samuel not only
delivered the superb bonus mix for this album, but
also this warm and very funky tune with whipping
beats. Exclusively produced for this album.
11. Guido Schneider:
Las Cuerdas De Las Canarias **
Guido Schneider’s exclusive track is another beautiful
minimal and techy house piece that creates a
dense atmosphere. The cascading melody fragments
are dancing on the clicky ticking beats.
12. John Tejada: Sweat (On The Walls)
With it‘s tight production and the spoken vocals by
Qzen „Sweat (On The Walls)“ by US top producer
John Tejada is one of the huge tunes of the moment
and made amongst hundreds of playlists and charts
the No.1 in german Groove magazine‘s two-monthly
charts.
13. Donnacha Costello: The Plan **
Another exclusive production comes from another big
discovery in 2004. Donnacha Costello‘s „colourseries“
with already 9 releases on his Minimise label
stirred a big buzz in the clubscene and we are proud
to present „The Plan“.
14. Phonique: Suspicious Kermit Dance
This fine Phonique track from the „Suspicious EP“
(PFR46) makes your heart jump, your feet shuffle and
your ass shake.
15. ADJD: Getting Closer
The airy „Getting Closer“ from the „Stocktown Biziniz
EP“ (PFR42) perfectly closes the brilliant Jeff Samuel
mix.
www.pokerflat-recordings.com