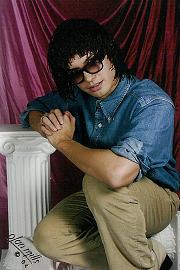 Since the 22nd of October will be your first gig in Holland, please tell us who you are and where you grew up?
I was born in Marquette Michigan-9 hours north of Detroit. My father is from Michigan. My mother was born in Indonesia. Her father was a boatman with the Dutch Navy stationed there. I am proud to say I am a quarter Dutch. I have lived in New York for eight years and will be moving to Paris this November. See you later USA…

When did you get into electronic music?
My father is a musician, who was in various funk/ rock bands while I was growing up. His cousin had a record store in Saginaw (Michigan), where he would bring vinyl EP’s back home to listen. At this time I was enrolled in jazz dancing classes and really flipped out when he played Laid Backs “White Horse”, Princes “Erotic City” and Kraftwerks Tour de France, my older sister and I would choreograph fruity dance routines to them in our living room. Sheila E was also big around our house. It wasn’t until I was 16 or so that I discovered Sheet One by Plastikman at the mall record store! I flipped. It was spooky and beautiful. Around that time the rave scene in the Midwest was blowing up and I became a fanatic, though I would have to drive at least 6 hours for any action-hillbilly. It’s funny irony that one of my biggest inspirations has become a supporter of my work. Now if I can only hook up with Prince.

Which artists influenced you the most and which artists have the greatest influence right now?
It’s a tie between Prince and Richie Hawtin. I grew up on Prince, who shaped my personal style from early adolescence onward. His use of drum machines and synths really caught my ear at a young age, not to mention his ambisexual flair. Sheet One was the first true techno that caught my ear. Rich’s live shows of the 90’s were always very intense. At that time it was about pushing the intensity, be it in the stripped down direction, or with heaviness. Magda and Troy Pierce have been my champions from day one. They were the first to play my music and listening to them dj-ing through the years has had a tremendous influence on my aesthetic. The German’s have blown my mind countless times, their use of tonality and sounds as objects is really unique and a constant inspiration-Klang, Perlon, Mille Plateaux, Contexterrior and Playhouse have all informed me with cool ideas.

And which ‘newcomers’ are the ones to watch?
I love Konrad Black and Matt John. Pheek is wonderful, as is Ryan Crosson and Posse in Detroit, Tractile (Toronto), Butane (Indianapolis), Camea and Clink records in New York are all doing great things despite the weird state of things in North America. Now that the laptop and the market for specialized music soft wear is so vibrant I think we will have more and more talents emerging.

Where did you get the name Heartthrob?
It has been Magda’s nickname for me for years. When we first met I was very athletic-lifting weights, swimming daily etc. She really took to my kind innocent look, and dubbed me Heartthrob. Shortly after I got to know her I lost my interest in exercise and folded to her moral corruption. God bless her heart!

Could you tell us a bit more about the Vivianne Project and Crabclawcollective?
Vivianne Projects is a very special project for me. When Magda was being held hostage by her evil alter ego Hagda, her friends came to her aid and put together the Vivianne Project organization. Its run by Vivianne Whistlewood, a defunct little shell of a women who has been my constant companion for years. She has recorded some of the worst trash available. Our single XTA-FANTASY was an unsung hit for a short time last year. We worked together on Crab Claw Collective, four tracks inspired from Magda’s dangerous liberation from Baltimore, where she was being held. I am really proud of those songs and am thankful that Jay Haze say something special in them!

The upcoming release on underl_ne was first announced as being produced by Heartthrob, but now it turns out to be released by Vivianne Project. What’s the difference between these alter ego’s and what makes you decide which alter ego you are going to use?
Heartthrob is sort of an arrogant control freak, while Vivianne is a sloppy mess who can turn on you, steal your wallet and cop a feel in a second. She’s kind of all over the place, so I reserve the more tragic moments for her. Tragic but uniquely special. Make sense? There is also another persona-MANTRAP, but that’s too insidious to discuss at length.

You produced a track on the Minus 25 compilation and your vocals are heard on Troy’s new EP Run, can we expect more in the near future?
My first solo EP will be on Minus, number 31-called Time for Ensor (after the Belgian painter James Ensor). After that comes Underline 5 Vivianne Projects and some secret projects that are forthcoming.

Since Berlin seems to be the capital of minimal and a lot of producers and dj's live there close together, don't you think the sound of these dj's and producers vary too little?
For the last ten years I have paid close attention to techno music and have noticed a lot of trends and directions come into play. Regionalism can’t be denied at times. I imagine the environment in Berlin has a lot to do with what is happening at the moment. The simple fact that Ableton and Native Intruments have their bases there is very significant. With a formal style like minimal techno interchangeability becomes one of its qualities. Its up to the artist to put their personal stamp upon it and hopefully create something that won’t date itself.

Did you ever play in Europe yet? And if so, where did you play?
Berlin will be my first European date. I play there on September 22nd.

How would you describe the minimal scene in New York, and what’s the role of the project DarkWeaveBBQ in this matter?
New York has a great little scene. Most people pass through and play at a few of the cool little venues that have become the supporting posts of the scene here. Novay at Apt, Subtonic, Wolf & Lamb, Robots and a few others keep things going on a weekly basis. Its always intimate and everyone is there for the music. Dark Weave BBQ was an 8 month residency that was the platform for Vivianne Projects. It served as our weekly meeting platform and strategy. My buddy Mike Shroff and I had a lot of fun organizing that. We brought great talent to a shitty little dive near the east river. It was awesome and a lot of people loved it.

How important is internet for you as a musician? For example, are you planning to release more tracks on netlabels like Textone?
The Internet is an invaluable resource. I am on it constantly. I would like to release some of the really far out recording with Textone. Pheek’s label Archipel is also hot.

And how does Internet influence you in the communication with other artists?
I am online almost all day, sharing files, drafts of songs, giving tutorials and tips. I collaborate with my father in Hawaii. He is a excellent guitarist and budding electronic musician. I share everything with my artist and label friends this way. Its very helpful.

What are your expectations of Amsterdam and the Dutch women?
I expect it to be the heaven I have been dreaming off since I was a child. My mother and grandfather have always told wonderful stories of when they lived there. I hope the Dutch women are as fond of me as I am of them.

Thank you very much for this interview.
Thank you for letting me live in my fantasy world!