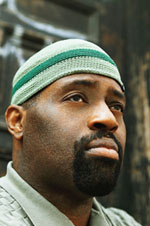 Chicago Mayor Richard M. Daley has proclaimed Wednesday 25th August 2004 as "Frankie Knuckles Day". The DJ reputed to be the 'Godfather of House' is having a street named after him, a first for any DJ in the world.

The DJ/producer who has pioneered house music for the last two decades will take time off from his 11 month A New Reality World Tour and return to the city for an honorary street dedication ceremony.

The event will include the renaming of Jefferson Street, between Van buren and Monroe to "Frankie Knuckles Way", and begins at 12.00 noon outside the legendary Warehouse club, where Frankie started playing more than 20 years ago, the venue widely said to be the birthplace of house music.

The ceremony will culminate with a presentation by Alderwoman Madeline Haithcock at 6.30pm, who will honour Knuckles before his set at the Chicago Summer Dance event being held at the Spirit of Music Garden, Grant Park (601 South Michigan Avenue).