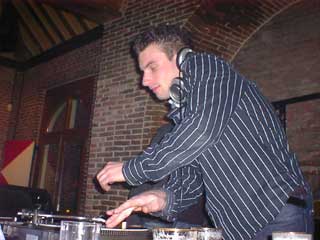 
In the mid 90’s DJ Yo-ep’s feeling for house music was getting stronger and he visit in that period a lot of house parties. Quickly he started spinning in 1998 and aquired a strong feeling for music.

He is now busy studying Media & Entertainment Management in Haarlem, where he studies to manage or promote parties and even produce music. In the past he was part of the organisation called "Cloistered Community", and a few years later he organised Speaker Attack and Meet & Greet together with Mark van Ginkel. ( read all about it in the section “ history”)


Though he has played at only a few parties but with the start of the new party organisation AM-PRODUKTIONS he certainly will spin the wheels more often in the future!


In the beginning he liked to play music such as hard house but in a year he quickly switched over to techno. A few dj's that have influenced Yo-ep’s style are Dave Clarke, Chris Liebing , Adam Beyer and Umek.


Nowadays DJ Yo-ep is still spinning techno and has really improved his techno sets! He really knows how 2 make the crowd go wild by giving them one of his strictly techno sets.


Music has proven to have a huge impact on Yo-ep's life, both at work and play so keep your eyes and ears open for him in the future….