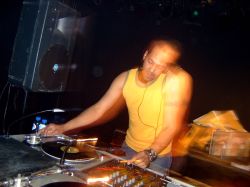 Amsterdam based DJ Jozo started playing records back in 1994 with a mix of NY Garage, Detroit techno and underground House in clubs such as The RoXY and the Escape in Amsterdam. Working at a local recordstore in Amsterdam he soon became part of the vivid nightlife of Amsterdam and started deejaying at different parties and clubs, with a monthly residency at the legendary Club RoXY.

Making music from the age of 14 and having a classical background, the step to producing his own music seemed like a logical progression and his first record (work it out!), produced together with DJ Robert, entered the clubcharts at nr 7.
Several releases followed on various national and international labels with people like David Morales and Little Louie Vega playing his records in their deejay sets.

Nowadays Jozo has a busy schedule of deejaying and producing various styles of electronic music. He is also owner and creative director of STRØM recordings (techno/electro) and Supaphunk records (House), both aiming to release quality music within their own genre.

His deejay style can be described as a blend of underground house, fierce techno beats and dark tribal rhythms…