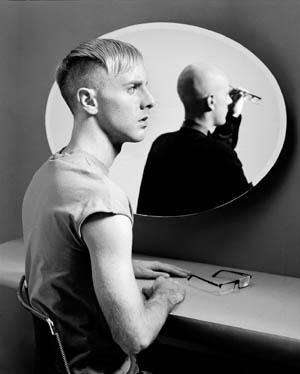 Olympic ceremony producers K2006 invited Richie Hawtin to collaborate with renowned Italian choreographer, Enzo Cosimi, on a key section of the XXth Olympics Winter Games Opening Ceremony taking place in Torino on February 10th. The new composition titled 9:20 was written & produced by Hawtin and will accompany Cosimi's provocative choreography featuring famous Italian dancer Robert Bolle along with dozens of other dancers, performers and acrobats. Hawtin & Cosimi worked together in Hawtin¹s Berlin studio to fully realize the drama and emotions of Cosimi's performers, building an evolving soundscape of sounds and effects to accompany the different movements of Cosimi's piece.

Ceremony producers have assembled an energetic program planned for the Opening Ceremonies with a theme originating around the foundation elements of Rhythm, Passion and Speed. Internationally renown not only for his music and global DJ performances, but also for his interest in new creative technologies, Hawtin is in perfect harmony with both the concept and its global a dience.

³Enzo and I are very much interested in pushing boundaries, both as artists and for our audiences. Working together for the Opening Ceremonies of the Winter Games delivers the creative endeavor to not only entertain a huge audience, but to also introduce them to sights and sounds that they may have never experienced before," says Hawtin from his studio in Berlin.

Born in England and raised in Windsor, Ontario, Canada, Richie Hawtin is
highly regarded internationally for his recordings both as Richie Hawtin and his pseudonym as Plastikman while on the world stage as one of electronic music¹s most innovative and in demand performers. His recent album, DE9 |Transitions boasts a CD mix plus DVD featuring a 5.1 surround mix produced by Hawtin. Today, in between touring the globe, the Canadian producer spends time between his studios in Windsor, Canada and Berlin, Germany.