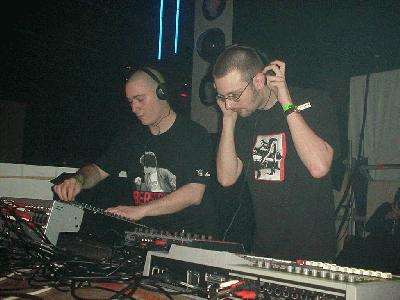 Ignition Technician were formed in 1999 by Pete
Simpson and Richard Wilkinson. With Wilko and Pete coming from Leeds, they were influenced by the music and up for it attitude found in northern England clubs such as the Orbit, Voodoo and Bugged Out. They have worked through all levels of the club scene with Wilko working as a Sound Engineer for Cream and Bugged Out where he maintained the sound for many Djs such as Dave Clarke and Carl Cox who played many early acetates of Ignition Technician material.

After working at Cream for three and a half years, Wilko moved to work as an engineer at the Orbit, where he has remained ever since.
Pete completed a degree in combined electronic engineering and music where he specialised in Music Engineering and Production.

Wilko and Pete have worked for Wedafuqawi (run by Ben Wills) helping to shape the sound and eputation of this relatively new label. Wilko has worked on various projects for the Pounding Grooves and Audio label.
Wilko and Pete were able to involve themselves in the Punish label through long time friend and associate Mike Humphries who introduced them in turn to Glenn Wilson. This led to a collaboration between Glenn, Wilko and Pete, culminating in a succession of releases for Planet Rhythm, Template and Punish.
Ignition Technician have also worked for Ben Long on Ergonomix and Potential, Billy Nasty on Tortured and Oliver Way's Urban Substance. Wilko and Pete also have a couple of recent releases on Player. Forthcoming projects from Wilko and Pete include releases for Pimp Records and new label Ignition Records as well a release on Highland Beats