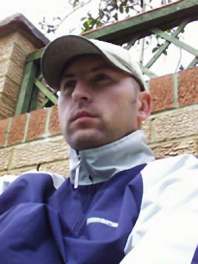 Glenn started dj-ing at a local radio station in 1992 in Helsingborg south Sweden playing & exposing various forms of techno & house, at the end of 92 he opened his own record shop and started his label called Planet Rhythm which had one purpose: to expose the production talents of Swedish artists, at the begining of 93 Glenn talked about his ideas to a producer called Cari Lekebusch who he had met via a friend in Stockholm who he used to s! ell records to: Cari agreed to do the first 2 releases for the label.
In 94 glenn Moved to Stockholm to try and expand both the record shop and the label, after a few months a place was found to set up the shop and the label, this place also became home for Cari's Hybrid Productions & Hybrid Studio after a very short time Glenn needed more help in the shop and also new artists for the label.
Cari had a few underground producer friends who he told about Planet Rhythm and soon demos where arriving. Adam Beyer, Jesper Dahlbaek (aka Lenk) Thomas Krome, & Fredrik Almqvist (aka RND Technologies) all started producing for Planet Rhythm, after a few releases Glenn started releasing a remix series for the label using artists like The Advent & Cristian Vogel. After many years in Sweden Glenn moved back to his native England to concentrate more on his label.

Straight away in mid 95 before his return to England Glenn set up, Planet Rhythm UK which was to provide a more selection of artists from around the world but still hold a Swedish connection. Planet Rhythm UK still released many of its Swedish producers like Adam Beyer, Cari Lekebush, Jesper Dahlbaek, Thomas Krome & Fredrik almqvist but also under different names, such as Cari as Shapechanger and Fredrik as 40ft Puma. Planet Rhythm UK wanted to reflect a more global Mixture of artists and released the early works of artists Like: Gaetek, Umek & Andrei Morant it also started releasing work by female producers like Jana Clemen (aka Abstract Soul). Many others have found their way onto Planet Rhythm UK like, Headroom, Slobodan, Savinto, H (aka Mike Humphries) & Blulight Isms to mention just a few.

In 96 Planet Rhythm started its first sublabel called Template that released artists Like Lash (aka Gaetek), Jack Mackrel, Postor (aka Savinto), Ind-Ex, Tuomas Rantanen & Render (aka headroom). Shortly after, the second Sublabel Called Col! ours was started that is ltd to 1000 copies and which released some of Glenn's first productions.

While dj-ing at a party in Slovenia Glenn met up with producer Mike Humphries and realised they had similar music & production tastes & set up Punish Records. Which they use to release most of there own productions.

In January 99 Glenn Set up his latest Label Called Compound which is dedicated to getting back to the early values of Planet Rhythm and searching for tomorrow's stars…
Glenn has dj-ed, at various parties in the following countries: England, Sweden, Denmark, Holland, Spain, Slovenia, Serbia, Luxembourg, Australia, Japan. Etc…. DJ Style: Pumpin Solid Groovin Techno