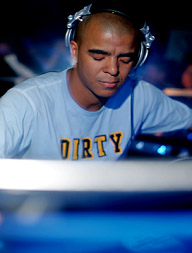 Erick Morillo is dance music’s chairman of the board, a magnetic, dynamic figure whose keen business sense is matched only by his virtuosity at the turntables and unstoppable sense of right in the studio. Carrying the banner of Subliminal Records, the label/brand and way of life he started in 1997, Morillo has traveled the world and conquered each port. He’s done so with a raise-the-roof party mentality, a strong dose of tri-state spunk, and the chunky, funky house sound that is so unique to him that its universally described as “Subliminal.”

Morillo was born in New York, but raised in Colombia and New Jersey, so his musical footing is appropriately in Latin, reggae, and rap. He started DJ-ing at the age of 11, and his hunger for music soon brought him from wedding DJ gigs, to studio engineering classes at the Center of Media Arts. Eventually he showed up at the offices of Nervous and Strictly Rhythm, the preeminent mainstream dance labels of the time, bearing his own musical creations, which he admits weren’t always that good. But after a string of rejections, he presented Strictly with an ethnic energy blast called “The New Anthem” under the moniker of Reel 2 Reel. That got signed, and was soon followed by Reel 2 Reel’s “I Like To Move It,” a track so huge that people who don’t know a damn thing about dance music can hum its every line. “Move It” took over the pop charts all across the world, including the UK, Holland, Germany, France, Belgium, and Australia, and gave the young producer his first chance to tour Europe.

Emboldened by his success, Morillo (with his production partners Harry Romero and Jose Nunez) launched Subliminal Records in 1997 after almost a year of prep. During that time, he fussed with logos, packaging, and every detail of the look, feel, and function of the label, all with the goal of “standing out from the herd.” But he never had to waffle on the musical policy – guided by Morillo’s ear and studio presence, and bolstered by his equally able teammates Romero and Nunez, the sound of Subliminal’s artists has been consistent yet always different, an amalgam of disco, soul, funk, and house, both vocal and instrumental, that’s as underground as it is party-ready.

Six years later Subliminal has 100 releases behind it, ranging from full-on radio smashes (Who Da Funk’s “Shiny Disco Balls” on imprint SUBUSA) to underground house classics like Ministers de la Funk “Believe”. There’s also a series of successful and highly anticipated compilations that showcase the label's developing artists and sound (Subliminal Sessions), and imprints designed to highlight different styles. Sondos is for thicker tribal beats. Subliminal Soul handles the easy, lush stuff. Harry Romero's Bambossa releases his thick-bottomed, classic-styled house. And SUBUSA represents the rock ‘n’ beats cocktail that the Subliminal label sees as the future. In addition to having loyal fans worldwide, Subliminal has been honored twice as “Best Label” at the Muzik Awards (1999 and 2000).

But that’s not been enough for Erick “More” Morillo: Because in addition to being a hit maker and CEO, he’s one hell of a DJ. Prompted by the climb-the-walls, call-in-to-work success of the Thursday weekly party he started in New York (also called Subliminal Sessions), Morillo took the vibe on the road, testing out the strength of his brand at events like the annual Subliminal Sessions extravaganza at Crobar during Winter Music Conference, and at his own coveted residency at Ministry of Sound (he’s one of few American DJs to ever hold one). This summer, Subliminal Sessions will hold court each Wednesday at Ibiza’s Pacha nightclub for the third year in a row, featuring Morillo working his acapella collection and knob mixer to the bone alongside internationally renowned DJs like Josh Wink, Deep Dish, and Robbie Rivera. The residency is already highly decorated: Subliminal Sessions was named “Best International Club” of 2002 and “Best Ibiza Party” of 2001 by Muzik magazine, and Morillo was named “Best International DJ” in 2002 and “Best House DJ” in 1999 and 2001 at the Pacha Ibiza awards. This year he’s added a live component, inviting house legends like vocalist Robert Owens, and rising stars like Terra Deva to perform their tracks for the Ibizan massive. And between Wednesdays, Morillo will play a whopping 30 gigs all across the globe, making stops in Greece, Malta, Amsterdam, Liverpool, Madrid, Belfast, Russia and beyond.

And at some point over his party-packed summer, Morillo will find time to put out Subliminal’s special 100th release, a collaborative affair “Dancin’” by him, Romero, and Nunez, and the fifth installment in the Subliminal Sessions compilation series, which is mixed by Erick Morillo. He’s also slating the release of his first-ever full-length artist album (already completed) for the winter. And on the seventh day, perhaps he’ll rest…but probably not…