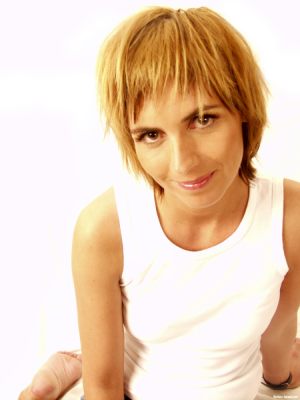 Read an exclusive interview Groovetrackers did with Anja Schneider HERE

To have heard about Anja Schneider is not difficult at all. At least not if you live in or around Berlin, or if you are connected via cable to the world of VHF-entertainment: since the year 2000, she has been presenting and editing the programme "Dance Under The Blue Moon", broadcasted every Saturday on Radio Fritz. This is one of the most successful and important German club programmes, where she presents live highly innovative sounds of the club scene, very often before they are released. She has the electronic music scene’s confidence, and she delivers week by week a new definition of what is possible. She receives guests like Tiefschwarz, David Duriez, James Murphy, Märtini Brös, Alexander Kowalksi, Gus Gus, DJ Pierre. And, last but not least, she provides the imperative soundtrack for Saturday nights in a light-hearted, professional way.

Anja Schneider has been living in the capital since 1994. In the beginning, she worked as a producer of special features for KISS FM. One of her most successful projects has been the development, conception and realization of "KISS FM Loveboat", which after changing her employer and going to Radio Fritz in 1997 had been developed further. Today it is known as "Fritz Loveradio", and it is getting more and more popular. It is the most spectacular off- and on-air event: 50 internationally renowned DJs play live for 50 hours. In 2003, this project was granted the German Dance Award in the category “Best National Radio Programme”.

The reason why she focusses more and more on being a professional DJ herself for 3 years now, is that she loves to present her favourite records to her friends and other people. Be it in clubs or on festivals, her intention is always the same: to take people to a trip. Since November 2003, she has her first own residency in the Watergate – the ‘popmobil’, which is already one of the established classics in Berlin’s nightlife, with select guests like Agoria, Mocky, Jennifer Cardini, Jesper Dahlbäck, Air Liquide, Joakim, and many others.

With her friend Sebo K., a Berlin DJ and producer, Anja Schneider seems to have a kind of symbiotic relationship. Since June 2004, they are producing a combination of minimalism, female playfulness, hard acid lines, and dry, groovy beats. "Tonite", the first release by Anja Schneider, has made it into the DJ charts of Phonique and Ewan Pearson, and PIAS signed a contract immediately. Release: September 2004 with remixes by The Youngsters and Dirt Crew.