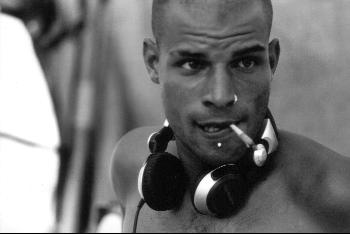 David V aka David Vunk is one of the main freaks from the west coast north side of Rotterdam. He bought his first record on the age of 11. It was micheal jackson's "Thriller". His father is the man from the 13 weeks number one hit "Spooky's day off" and gave him the talent to play and make music. He played every kind of music and nowadays his favorite sound is a mixture of Chicago trax, Italo house, House, Disco, Acid trax, Electro and warm funky techno. People like: Giorgio Moroder, Patrick Cowley, Lime, Bangkok Impact, Ultravox, Lego welt, Org Electonique, Alden Tyrell, Unit Moebius, I-f, Spiral Tribe, Depeche Mode, Franky Knuckles, New Order, Joy Division, Keith Richards, Jeff Mills & the Underground Resistance Posse, everybody at Clone and Dj Ricky the Dragon made him to what he now is. His debut 12inch on one of the finest record labels of the Netherlands "Creme Organisation" began with the Electroband "Pussycat" this together with his best friends Seutek and Rick "The Dragon" van Breugel. The second 12inch is coming up on a new recordlabel called "elektrobot" and listen to a trackname "Promised you a miracle". David Vunk is DJ-ing for about twelve years and making music for about four years now.David Vunk travelled on his musical journey through underground-parties to dance parties in the almost every club in the Netherlands. For examble: Paradiso (A,dam), Nighttown (R,dam), Waterfront (R,dam), Symplon (Groningen), Paard van Troje (Den haag), Club Plus (Groningen), Mazzo (A,dam), the old Now&Wow (R,dam), MMM Festival (Latvia,Riga) and several Festivals all over Europe. David played with big names like: I-F, Legowelt, Org Electronique, Monica Kruse, The Hacker, Dave angel, Slam, 69db(Spiral Tribe), Di'jital, Bangkok Impact, TLR, Steve Rachmad, Steffi, Tim, Michel de Hey, Billy Nasty, Benny Rodriquez, Joachim, Spindokter Ries and of course more than thousand times with his best friend and partner in crime Seutek. So it's for your own risk when you listen to David V's Musique…………..