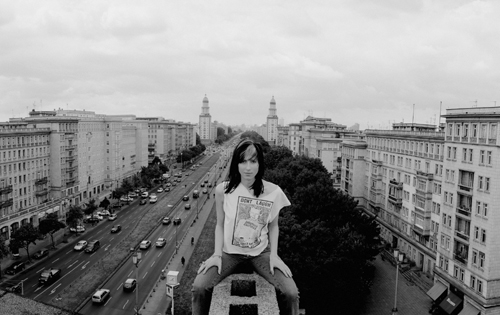 Ellen Allien, hyper-active DJ, producer and label founder of BPitch Control, never stays still. Ellen Allien refuses to lose herself or the pleasure the goes with all the coordination of her activities. Her creativity is channeled through the creation of her own system: the label BPitch Control works with a steady experimental character for Ellen Allien herself as well as the label artists that surround her.

The development of Ellen Allien is largely defined by one circumstance - the engagement with "music of the future," i.e. techno and the historical after effects of the year 1989.

At that time this native Berliner witnessed the geographical change in Germany, as well as the specific expansion of Berlin; but most of all she experienced unforseeable events. The complete shift of the city coming from refreshing cultural winds has left significant traces in Ellen Allien's life. It started with the occupation of vacant places and has ended with the fruition of a completely new subculture. The continuous mood of change has become an elemental piece to her person. The starting point for her work with electronic music and techno is based in its own principles: don't wait for something to happen, activate oneself. For Ellen Allien, the idea of "do it yourself - no matter who you are or where you come from" implies the practical prerequisite for a democracy.

The term collective has replaced that of individual in terms of success. Still, Ellen Allien has her own fast-forwarding career in clear view yet always relies on an independant network, which benefits itself from working together. The participation in such a process-based community, where the output is available through BPitch Control, spells out the actual fun for all participants - for Ellen Allien as well. Consciousness in regard to the open-ended quality of diverse projects is woven into the label's philosophy. Open mindedness for musical currents, as well as one's own development, are prerequisites for particitpating in the collective. Ellen Allien literally started out on her own path from ground zero in Berlin's nightlife, which now is known for techno and electronic music. All aspects of the genre are researched in order to find the right place and take it. Since 1991, she has been standing in front of euphoric audiences as a DJ while expanding her own musical horizons. She has also worked as a radio host, producer, event manager and, last but not least, label founder/manager to actively define and redefine the structures of the musical subsystem. Most noteworthy is her subtle touch for the combination of musical innovation and mental excess which builds the solid base for her wide-ranging view. Independance is the most important creed.

After working intensively for years, 1999 was the year Ellen Allien gave birth to her own network: BPitch Control. The channel is open. She sees her label not only as an independant channel for self-representation. It is much more in that BPitch Control serves as a platform where she and other artists attempt to capture current musical tendencies with actual product to show for. One would of course like to be a step ahead of the pack in doing so. The identification as a collective remains the essential piece of the label. It functions as a network to try and promote creative potential.

With the 2001 release of her debut album "Stadtkind" as a dedication to Berlin, Ellen Allien not only stirred attention towards her own musical talents, but also brought attention to the structure of her label in the context of electronic music in Germany and Berlin. Coming off of the major success of "Stadtkind," Ellen Allien was struck by a new idea after completing her world tour. She loves travelling and meeting the most diverse personalities. The worldwide sympathetic feedback strikes a chord, bringing forth an emotional response. An international focus in thinking and feeling as well as doing becomes ever more important to her. She thus begins to increasingly understand the meaning of her persona in Berlin through the exchange with musicians around the globe. Ellen Allien utilizes her experiences directly to create a cosmos in Berlin where as many people as possible can collaborate. With that she helps define the city itself. She has been active starting series of parties since 1997 while relying on the "do it yourself" principle. With the onset of numerous BPitch Control label parties, she presents herself anew each time within the collective. 2001 she initiated the series titled "Boogy Bytes" that takes place in alternating Berlin locations. It especially was coined to give space to her musical impressions. Here she gathers listening and dancing under the blanket of a collective experiment. In effect, the listener and she herself are always confronted with accompanied borderline experiences.

Self-understanding as an independant producer is also the experiental foundation for Ellen Allien: with numerous releases since 1994 she takes the role of women in the context of electronic music as the precept for confrontation right next to the goal of self-realization. "Berlinette" will now appear in 2003 as her second album, also taking up Berlin as a theme while incorporating her experiences over the past years. As always, she is keen on new developments, gracing her next album with further mental experimentation.