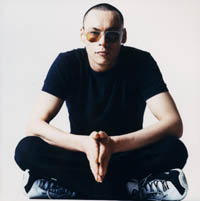 In 1997, Luke Slater sent a tsunami through both the techno and the breaks communities. Dropping ‘Freek Funk’ on London-based NovaMute, Slater consolidated on earlier works like ‘Freebase’ with Al Sage and important releases under the monikers Clementine and Planetary Assault Systems. ‘Freek Funk’s sixteen tracks focused on organic drum sounds, courtesy of ‘the delicious talents’ of Hulal. Four years on Slater remains a prominent tastemaker with a cheeky attitude to playing tunes. He’s even brought four decks for our listening pleasure.

Mesmerized by the soundtrack to Kubrick’s ‘2001 � A Space Odyssey’, Slater quickly found a passion to innovate not imitate. From experimental noodlings on his dad’s 1957 Garrard Hi-Fi and a battered Roland 808, Slater has built a formidable studio and followed up with ‘Wireless’ and now the mix double-opus ‘Fear and Loathing..’ His grass-roots approach to production has bewildered and inspired dance aficionados, and finally he is back in the country to take a big role in the Summer Sound System extravaganza.