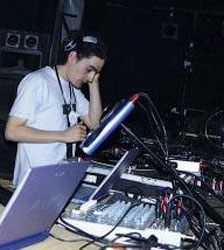 Bio:
Log, Producer and DJ. At ease with piano, guitar, bass and music softwares like Reason or Logic Audio Platinum.

After few years of concerts with some funk and dub bands, he discovers sound synthesis and programming.

Back in Bordeaux, he programs break-beat, drum&bass, triphop, hiphop or lounge in electronic projects like Dubweisers or Uprock Massive. With Shagshag since 99, he experiments a 4 decks & effects techno mix with his mate dj Akt. Behind the desks, he goes from tribal house to massive techno.

His strength, the effects : Pioneer DJM3000, Kaoss Pad, Air FX, he destructures and transforms the mix at is own style. Result : a mix full of surprises.

Olivier Giacomotto aka Log, producer and DJ from Bordeaux - France, started his career in 1999. He first got into production by working in recording studios where he learned how to use samplers, mixing desks, effects, computers and music softwares.

Back to Bordeaux, he programs break-beat, drum'n'bass, triphop, hiphop or lounge in electronic projects like Shagshag, Dubweisers or Uprock Massive.

During year 2002 with Shagshag, he won a remix contest organised by NEWS and got his first vinyl released : Plastyc Buddha - Rhodes Royce (Shagshag Remix).

Step by step, Olivier progressively got deeper into techno and started to play as dj with the ProFS system, first edition of Finalscratch.

His mixing sessions can be described as punchy and groovy….. using redsound soundbite sampler, air fx, kaosspad, destructuring the mix with effects is one of his strength.

With the release of Playground, his first EP signed with LUPP (famous belgium music label who already produced many big hits with Stanny Franssen, Filterheadz, Max Walder, Dimitri Andreas, End-jy….), he was selected and played by Carl Cox as one of the ten best titles of April 2004. He's also included in Chris Liebing's TOP10 of June 2004.