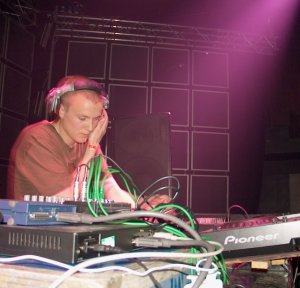 Gideon Bouwens grew up in a small town called Baambrugge after being born in one of the most liberal cities in the world just 10 miles up north, Amsterdam. Just 16 years of age, he started working in a local club/bar, one of Hollands leading underground locations, The Tumult. It was there that he learned about the existence of a different kind of sound. Now we call it dance, then it was simply called house-music. Soon Gideon realised that this was the music he loved and wanted to play. He bought his decks, started buying records and within no time discovered that techno was the thing for him. In Phonopunks view a good techno-set should be about: rhythm, funk, tribals, skillz, and not making any compromises in the mixing. Still, just pounding and beating the crowd is not his style. As he said himself: "I'm taking the punk to the phono!!" Having done several succesfull performances at "The Tumult" Phonopunk made the jump for the big city. After winning the diesel-u-music award he is now occupying a residency at the monthly techno-night "Mainstage" where he's playing a packed Escape Venue side to side with the big names of the industry such as Umek, Ben Sims and Cristian Varela. Holland and Europe are about to meet a new generation of DJ's and Phonopunk will do everything he can to be one of them.