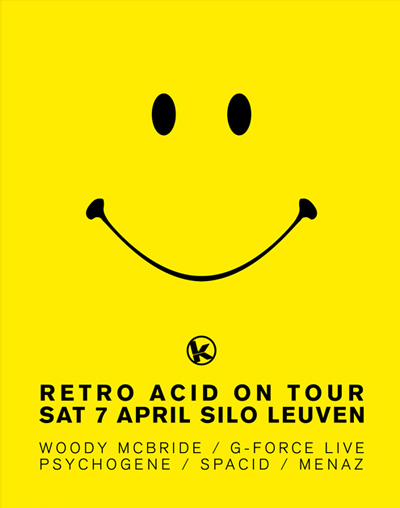 After Kozzmozz’ K-Sound, also their other and second oldest concept Retro Acid is ready to hit the road and explore other scenes and crowds in Belgium.

Retro Acid is thé party for the fans of the 303 and it’s unmistakable Acid sound, the machine that formed and shaped electronic music and keeps influencing it. It surely did so in the early days when we loved to dance to it ! The current Acid revival proves that we still do today so let's see where it all came from.

The famous Silo venue in Leuven which has been completely restyled and fitted with new light- and soundsystem, also seems the perfect place for a true underground acid party, another kind of party that Kozzmozz is famous for, and also beyond Ghent! As we were welcomed with open arms by the Leuven crowd on K-Sound not so long ago, we hope to amaze them again with our Retro Acid spirit !

And who can defend that spirit better than Woody Mc Bride also known as DJ ESP and legendary labels as Drop Bass Network and Communiqué Records which he has just re-released via Beatport. Next to that he’s doing a worldwide tour called ‘Positive Vibrations’ which will take him to festivals as Mayday (Germany) and Cavemen ( USA) next to Retro Acid in Leuven and many other spots in Europe and America.

He will be joined by G-Force who has sworn off his techno moniker Stanny Franssen and is now back and only in acid action with a stunning live performance !

Another pioneer and acid lover is Psychogene who recently threw some acid editions of his famous concept MadeinBrussels and has been on the scene since the early days.

Also resident Spacid and up and local talent Menaz will be on their acid best !