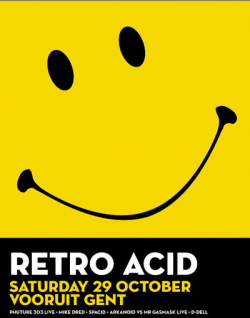 Kozzmozz organised its first Retro-Acid Party in '97 and was the first organisation in Belgium to do so. We are consulted in our program by DJ Spacid, who organised even earlier Acid-parties with the Funky Green Aliens crew in Democrazy.

Retro-Acid has definitely helped to revive the Acid sound as it’s making a fierce come-back. Lots of new labels are venturing into acid again, lots of old skool acid compilations are hitting the shops and older labels are eager to re-press their old classics.

This is unquestionably the living proof that Acid was and remains well appreciated by a new generation of party people. We already knew this from the overwhelming atmosphere of all the previous Retro Acid parties.

Retro Acid stands for a venue that radiates Acid through smiley-decorations, Acid T-shirts all around and of course, the best Acid Sounds brought to you by dj's and live-acts from home and abroad.

We’ll definitely bring you back to the original atmosphere of the early days.

Arkanoid vs Mr Gasmask (Binary Bassline)
Arkanoid (aka KDG) had always been in touch with music ever since his father
dj'd at several clubs and parties in the first half of the eighties. Studying
in Gent, he soon got mindraped by the organic sounds of the infamous 303.
Starting out playing in the backroom of the Decadance (with Phénomècron/ D'Naab 136), he got together with some friends to form the non-profit organisation Krank Kartell. The X-parties in Nieuwpoort and Oostende were a fact: a series of 8 acid parties from '98 'till '02.

Motivated by the fact that a lot of labels were more concerned with numbers
and sales than with music, Arkanoid started out his own label with
Mr. Gasmask (aka RD): Binary Bassline Records. A Gent-based acid label that
tries to release good music of all kinds, but never without the 303.
His dj-sets always are a symbiosis between the modernistic acidtechno, the early 90's basslinestompers and the mid-90's acidtrance anthems. Live performing and recent producing has brought him to make deep, solid, multibassline tracks, with angelic strings stressing the enlightenment of what acid music really is:
Music for the gods.

Mr. Gasmask is an alter ego for one of the members of Emetic, situated more
in the acid/electro/techno area rather then acid/techno which is more
Emetic's territory. Since our record label will certainly be one with a
broadminded attitude, electro & broken beats will also be released. Once
kicked off in the blackmetal/gothic scene, Mr.Gasmask evolved into a dark
cocktail of horror music & sour aggressive beats.
Influences : PAL, Wumpscut, Cherry Moon Trance, Ré:nald vs Teck, Noisex,
The Human League, xOx Roland gear, misery, hardcore pornografy…
Hardware is my thing, keep those softsynths away from me.
They are a threat to us all.
http://www.binarybassline.com

D-Dell ( Pompwerk)
D-Dell aka Double V, now 22 years old, started buying hiphop records at the Fried Chicken shop in Kortrijk back when he was 15. As time went by, he spent a lot of time with his electronic music friends in the Dirlik303 posse (with Waldo & Sammy).They gave him his first tekno/acid/experimental records (pcp, 2cb, peacefrogs, annibaldi) and much more.

He got his first residency at the New Chips cafe in Kortrijk, around 1999. At the end of the New Chips era, D-Dell organized a monthly tekno/elektro party, which attracted a steady crowd. D-Dell is someone who likes variety in his sets: tekno, bleepy, acid, oldskool, breaks and so on. D-Dell took over Pompwerk in 2001 and the Pompwerk edition in Le Must was a big success. Pompwerk is an underground organisation that throws tekno, bleepy, acid, acidtek parties around Belgium with amongst others: Michael forshaw (uk), Laura grabb (usa), Mike Dred (uk). In 2004, D-Dell is co-organizer of 7DAYS with Bliip, Neetz, Mutate & Alfa.