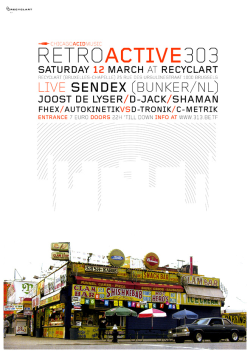 Sendex (live) (BUNKER records)
Sander Meyer aka Sendex is making music for quite some years now
Most of his music is influenced by/based on the sounds from the early days.
In order to get that good old feeling, Sendex is producing his music with
a setup that comes straight from the early eighties. As long as everything
works fine, he try's to avoid the modern technology as much as possible.
Sendex releases his music on the famous Bunker Records label.
His first release in 2001, an 8 track LP was received very well by the public.
It was a mixture of dark and funky electro. After then it look a long time,
but finally Sendex was back in 2003 with releasing two new records.
This time no electro, but the good old chicago acid/house sound.
In 2004 Sendex played at major cities like NY and Detroit during his USA tour.
All his music is recorded live!! Also his live sets are fun too watch. No laptops
www.sendex.nl

Joost de Lijser
Joost de Lyser started dj-ing acid, house & techno in 1987 at age 16, in local clubs near where he was born, in the most southwest corner of the Netherlands. Soon he found his way to the decks of clubs and parties in the cities across the water in the dutch province of Zeeland, but also across the border in Belgium. In 1990, Joost moved to Tilburg in the Netherlands to study, where he became involved in the Dutch Techno scene on a more national level, but he still spent most of his free weekends in Belgian Clubs…

In 1994 Joost started to play on the parties of the notorious Brussels underground techno party scene, and about simultaneously he was asked to be part of the Fuse DJ team, for the club's first season. In 1995, Brussels 2nd Techno club was born: the Network. Joost moved to Brussels & joined the Network DJ team alongside dj's Deg, Psychogene & Unit-E, and there the new-electro element in his sets started to dominate the techno side. The very last Network night was at the same time Brussels, and likely Belgium's very first new-electro only party (without techno). After the Network ended, Joost found new musical outlets in the Cybertheatre & at his own Nexus nights, pushing Electro to the Brussels party scene.

In 1998, Joost hooked up with DJ Uriel, and became resident for his now legendary Enjoy Apocalypse electro nights, where Joost still continues to play as guest. Shortly after he also became resident for the Klangforschung Ost parties in Eupen, and as one of Belgiums first Electro DJ's, Joost has played for most Electro party organizations in the country, as well as on most big events with an electro room (kozzmozz, body 2 body, alive festival etc,

Fhex
Who the fuck is dj Fhex ?
Call it chill-out room, downtempo dancefloor, mystical lounge or whatever… Dj Fhex knows the place. Since he's involved in the early Brussel's underground techno scene (d-jacking zone), he claims and insists to play in these particular rooms : chill outs ! ! ! From mind dancing to the wide variety of emotions inspired by the music, he find a real space of liberty. Not only in his technique but also in the ecclectism of his music selections.
Using samples, cd players, fx, turntables and smoking king size gold label. Dicover the Fhex's 303 side @ RETROACTIVE !

Shaman
Playing with rhythms, he likes to blend old school electro/detroit ghettotek with some rougher techno stuff.
Strongly addict of Deep Techno soul, experimental, abstract hip hop, acid & Chicago acid house, he's full of influence as long as the music is real !
In 1996, as a DJ, he collaborated with the Underground Concept Krew,
this project proposed several ACID parties in different locations as industrial settings
(48 hours/36 hours free parties), bus (partybus) & pubs (Radioactivebar in Brussels).
In 1999, he started (with Stel-R) the Fucking Aliens Project to gather all the
BXL underground forces. Since 2000, he has enhanced this project to create 'Formatted Industries' & '313'.
This gave him the chance to built something stronger which was always based on the artist (dj/producer)
such as Passarani 2099 (Nature/Rome), Ectomorph live, Rude 66 live (Bunker), Fastgraph live (Ersatz Audio)
,The Dexorcist, dj Overdose, MAS 2008, DMX Krew, Dynarec … as guests. He's working closely with
the Twisted Hardware Crew / Shadowboxing & Recyclart in Brussels.