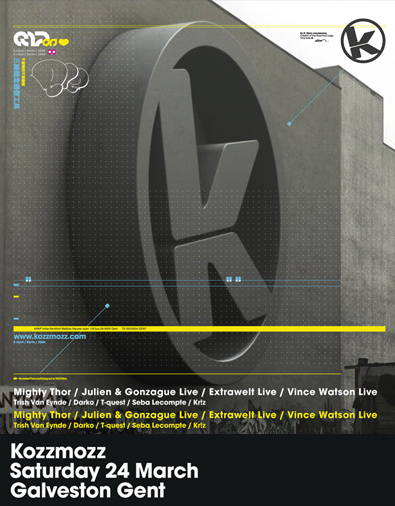 As you all may know, we have embarked on a new adventure in a completely new venue with Kozzmozz. A great industrial warehouse with lots of parking-facilities on the outskirts of Ghent : Galveston here we are again !

As we could read on the many fora, the crowd on New Years ( first Kozzmozz party at Galveston ) was quite happy with this move as it meant a lot more space for dancing, a very pleasurable temperature inside, bigger bars and faster service and a totally new environment where the lights and lasers were even more impressive than before and off course two rooms with slightly different techno sounds to double the fun !

So double fun again on this new edition of Kozzmozz where we feature a lot of fast rising talents, next to some big stars and the better Belgian artists of the moment.

The main room will see one of Swedens fastest rising techno-talents Mighty Thor who – in the past year – has released records on Drumcode, Patch and MH Records.

He gets the company of one of the hottest live-acts from France nl. the only French artists to have recorded for Jeff Mills legendary Axis imprint, Sub Space aka Julien & Gonzague. But it’s not only techno that makes them tick because you can also find them on the house label Minimalizm and off course their own imprint, Mirage Records.

They will get the full support of Seba Lecompte of Soundattack fame and DJ Kr!z who will have just launched his own Token Records with a first release by Inigo Kennedy. More to follow without a doubt !

In the second room, we bring you Extrawelt, without a doubt one of the revelations of 2006 with their ground breaking releases on James Holden’s Border Community and Sven Vaths Cocoon Recordings !

Vince Watson has been a big name for quite a bit longer with his first release on Rotation in 1995 shooting him right to the top. Lots of releases have followed on which Vince Watson also proved his diversity as a producer. He’s also been supporting a lot of his colleagues on his own labels Bio Records and Subconscious Elements but that didn’t stop him from producing more own work for labels such as Delsin and F Comm.

They are joined by Trish Van Eynde - still the undisputed leading lady of Techno in Belgium, Darko – the man behind in (in)famous Statik Dancin night in Brussels and founder of Lucy Lee Recordings next to our first hour resident T-Quest.