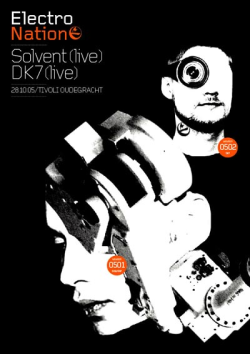 Solvent Live (Ghostly International, CAN)
Solvent a.k.a Jason Amm is Canada’s modern answer to the British synthpop wave of the 80’s. His finely crafted electropop tunes have made a big impact on the scene, released both through the Suction Records imprint he runs with friend Lowfish, and on labels like Vynalogica and Ghostly International, which released his Apples and Synthesizers CD last year to critical acclaim.

DK7 Live (Output, S/IR)
DK7 are Swedish DJ/producer Jesper Dahlback and Irish singer-songwriter Mark O'Sullivan. Together as DK7 they have focused in on the old skool acid sound. Check: The Difference (Output)

Nuno dos Santos (NL)
Well-known from the Full Spectrum parties around Holland, dj Nuno dos Santos is also a resident at Club Poema in Utrecht. His passion for music and different styles keeps him far from being a constrained dj. Nuno dos Santos' sets vary from deephouse, tech-house, electro and breakbeat to acid, minimal and techno.

GenErik (NL)
23-year old dj GenErik (a.k.a. Erik van Luin) caught the dj-virus when he saw Tiga perform at Berlin's Love Parade in 2002. Expect accessible underground, combining minimal, electro house, tech-house, breakbeat, acidhouse, techno and progressive. Not only a dj but also a conceptualist, GenErik prepares you for the unknown…